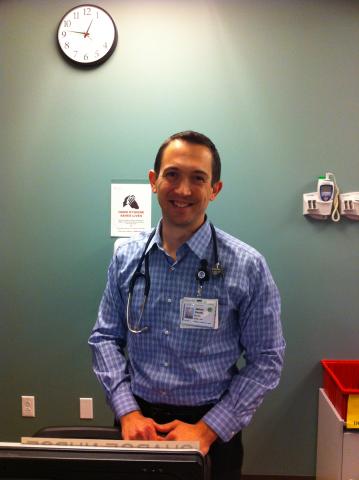 Alumnus Jason Overby, MS, RN, GNP-BC, has been hard at work since crossing the stage at UCSF School of Nursing MS Program graduation June 2012.  He has joined the growing cadre of advanced practice nurses at the Mills-Peninsula Medical Center in Burlingame.  Jason was hired at Mills Peninsula in August 2012 as the medical center’s Geriatric Advanced Practice Nurse, a new role in this agency.

Jason’s journey to the nursing profession is somewhat atypical.  Jason earned a Bachelor’s of Science degree in engineering from Oral Roberts University, Oklahoma.  Upon completion of that degree, he considered graduate work in mathematics.  Around that same time, Jason accepted a job at a nursing home in the Central Valley as the admissions coordinator.  His work in the nursing home setting, coupled with inspiration from a grandmother who was a Psychiatric Clinical Nurse Specialist, motivated him to consider nursing.  While working at the nursing home, he completed an Associate Degree in Nursing from San Joaquin Delta College, all while simultaneously executing various administrative and business roles at the nursing home including admissions, utilization coordinator and marketing.

Jason entered the UCSF MS degree program in the fall of 2009.  Throughout his enrollment in the Gerontological Nurse Practitioner track, he also served as an Army Nurse in the Army Reserves based out of Sacramento, CA.  While a master’s students, he was active in student activities, served as the MS representative on the John A. Hartford Center of Geriatric Nursing Excellence Advisory Committee, worked as a teaching assistant for several courses, and was selected as the Student Response Speaker for his graduating class.

Shortly after graduation from UCSF, Jason attained national board certification as Gerontological Nurse Practitioner and went to work at The Mills-Peninsula Medical Center.   Jason shares that his greatest pleasure of this position is the opportunity to lead and participate in various projects at the medical center including plans for achieving American Nurse Credentialing Center Magnet Recognition Program® approval and participation in the national Nurses Improving Care for Healthsystem Elder (NICHE) program.  He fully recognizes the power of his ten masters-prepared nurses team which includes two Cardiovascular Clinical Nurse Specialists (CNSs), one Diabetes Focus Nurse Practitioner, a Certified Diabetes Educator, several Psychiatric-Mental Health CNSs, two Oncology CNSs, a Wound Specialist and a Stroke Program Coordinator.  Jason shares that he and his team are the “go to” group when the medical center has a project that needs to be designed and/or implemented.  Jason described the best part of his job is working with his fellow APNs and the numerous opportunities to provide leadership and mentorship.

One of Jason’s current projects is to develop and seek approval of Standardized Procedures for the medical center’s APNs.  Once adopted, this will allow the APNs to practice to the full scope of their preparation and expertise.  Jason notes that the biggest challenge in this new position is to remain patient and keep his eye on the progress made.

Jason was a recipient of HCGNE scholarships during his enrollment at UCSF.  The Center is pleased that he is representing the school and the Center so well in the advanced practice arena.

About the UCSF/John A. Hartford Center of Gerontological Nursing Excellence

One of nine founding centers funded by the John A. Hartford Foundation at Schools of Nursing in the United States, the major goal of the Center at the UCSF School of Nursing, Department of Physiological Nursing is to prepare an exceptional cadre of nurse scientists who will provide the critically necessary academic leadership in teaching, research, and practice in geriatric nursing.